The Tagalog Project: Tod Allman and Ephraim Rey meet three or four mornings each week to build a Tagalog lexicon and grammar using TBTA’s software.  When they first started meeting, each sentence they translated required several hours of work because many grammatical rules had to be developed.  But the work has been progressing very well, and now they can work through two or three Bible verses in a typical two hour meeting.  As the lexicon and grammar become more developed, this process will certainly accelerate.  The software is now capable of producing an initial draft translation of a short story that describes how to prevent eye infections.  This short story was used before working in the Bible so that the quality of the translation could be checked with mother-tongue speakers.  Tod is currently performing the quality tests with approximately twenty Tagalog speaking adults and junior high children.  These tests consist of asking the participants to answer comprehension questions related to the text, and also to backtranslate the Tagalog text into English.  Tod and Ephraim have also started working through the biblical book of Ruth, and hope to have a draft completed by the spring.  After its quality has been checked, Tod and Ephraim will begin working through Luke.  Please pray that God will protect this work from any and all hindrances, and that their progress will continue to accelerate.  After the Tagalog lexicon and grammar are well developed, Tod will work with a speaker of a closely related language and modify the Tagalog grammar to accommodate that language.  The potential for Bible translation here is enormous.

Richard Denton’s Insights – in Plain English: Recently we’ve been working on the semantic representations for Titus. Titus begins with a long sentence that extends through the first four verses of the book, “Paul, a servant of God and an apostle of Jesus Christ for the faith of God’s elect and the knowledge of the truth that leads to godliness… To Titus, my true son in our common faith: grace and peace from God the father and Christ Jesus our Savior.” In TBTA, we broke this sentence up into 18 sentences! There are two reasons for this. First of all, there’s no guarantee that every language will allow an extended sentence structure such as this. But also, in TBTA we have to represent the meaning precisely so that there can be a precise translation into each language. In the original text, it is not always clear how one phrase connects to every other phrase in the sentence. Here’s how we translated the first part of this sentence: “I am Paul. I serve God. And Jesus Christ chose me to be his representative. Jesus Christ sent me to the people that God chose so that I would help those people trust in God. And Jesus Christ sent me to those people so that I would help those people to know true things. God caused me to do these things so that those people would please God.”  By breaking up the original sentence and making the relationships between all the phrases very clear, we’re able to produce clear and accurate translations in many languages.

The Spanish Project: Stephen Beale has begun working on Spanish with TBTA.  This version will be useful as a teaching tool, not to mention its potential use in the Spanish-speaking world. He would appreciate your prayers as he transitions from full-time university work to part-time TBTA work: both financially and, more importantly, that he could manage his time well with his many other responsibilities.

Robert Appleton: Robert has recently volunteered to help us manage our financial records.  We greatly appreciate his time and effort.  In the future, when you make a donation to TBTA, the emailed receipt will probably be sent by Robert rather than Richard Denton. 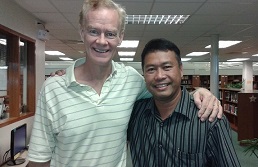 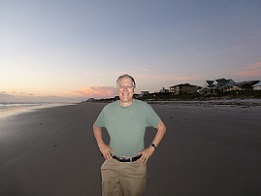 Tod Allman and Ephraim Rey                                        Richard Denton
The People of the Philippines: There are a little over 100 million people living in the Philippines, and that number is growing rapidly at a rate of more than 20,000 people per day.  The country consists of more than 7,100 islands, and is home to some of the world’s most beautiful beaches and spectacular mountain views.  At the time of World War II, the Filipino economy was the second largest in Asia, behind only Japan.  However, during the past six decades, the country’s economy has gradually deteriorated for a variety of reasons.  The economy has been growing, but it is not able to keep pace with the rapid population growth.  The Philippines’ poverty line is set at an annual per capita income of just $378 ($31.50/month), but more than one fourth of the country’s population is living below the poverty line.  Severe poverty is a significant social issue throughout the country, but no one has any viable solutions.  Numerous organizations from other countries are pouring their resources into the Philippines with a hope for a brighter future.  Please pray that God will somehow help the millions and millions of people here who are living in severe poverty.