The Philippines Project: Tod Allman and his family will be flying back to the Philippines on July 31st.  Please pray that they will have a safe trip.  For the next three years Tod will be working on Bible translation projects, and his wife, JungAe, will be working with other Korean missionaries at an orphanage and school for Filipino children.  Tod and JungAe are seeking prayer and financial partners who are interested in this work.  Would you please consider supporting them through your prayers and finances?  They have raised approximately 80% of their required monthly support.  They also need some one time donations to help cover the cost of moving to the Philippines.  If you’d like to support them, you can go to the Donations page of TBTA’s web site (www.TheBibleTranslatorsAssistant.org/Donations.aspx), or you can send an email to Richard.Denton@TheBibleTranslatorsAssistant.org.  All donations are tax deductible and greatly appreciated.

Semantic Representations: Richard Denton continues to work on the semantic representations, the source documents that our software uses when generating translations. Since February he has finished the initial drafts of 2 Thessalonians and 1 Timothy, and is now about half way through 2 Timothy. Richard and his wife Mary are currently trying to sell their house in Hanover, New Hampshire. They hope to move to New Smyrna Beach, Florida. Richard will continue to work as a research physicist for Dartmouth College, but as his grants gradually wind down, he hopes to spend more time working for TBTA. Please pray that their house sells.

Grant Proposals: Stephen Beale will be leaving his university position in September to work full-time on TBTA and Linguist’s Assistant. Please pray for him and his family as they make this transition. Stephen will be submitting several grant proposals over the course of the next few months that are directly aimed at enabling our work in the Philippines. Please pray for him as he prepares these proposals, and that God will smooth the road for them as He sees fit. 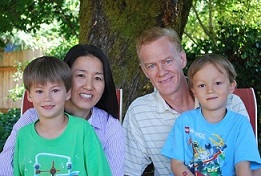 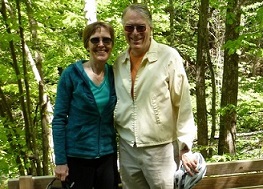 Tod, JungAe, Tayne and Shane Allman                         Richard and Mary Denton
The Languages of the Philippines: There are 181 languages spoken in the Philippines, and most of them do not yet have any part of the Bible.  Almost all of the languages spoken there are classified as Malayo-Polynesian, and structurally they are very similar to one another.  While Tod was there, he worked with speakers of Tagalog, Bikol, and Bisakol, and he developed partial lexicons and grammars for those languages.  During that process, Tod found that he could easily modify the TBTA grammar for Tagalog so that it accommodates the other two languages.  When Tod and his family return to the Philippines, he plans to develop a thorough lexicon and grammar for Tagalog, which is the national language and spoken throughout the Manila area.  After TBTA is able to generate initial drafts of multiple books of the Bible in Tagalog, Tod plans to modify that grammar to accommodate Bikol, which is morphologically the richest major language spoken in the country.  Bikol has more pronouns, more case markers, more verb forms, etc., than the other major languages.  After the Bikol lexicon and grammar are well developed, Tod hopes to produce initial draft translations of multiple biblical books in Bikol.  After that process is completed, the task of  modifying the Bikol grammar to accommodate many other languages should proceed fairly quickly.