A Strategic Shift:  Our ultimate goal here at The Bible Translator’s Assistant is to help translate the entire Bible and other Christian literature into as many languages as possible using the software we’ve developed.  However, for the near future, we’ve decided to focus on the Old Testament for two reasons: 1) While a number of other Christian organizations are working on New Testament translations, no other organization is making a large-scale effort to translate the Old Testament into minority languages.  2) Many of the missionary translators we’re in contact with don’t need or want computational help with their New Testaments, but they welcome it for their Old Testaments.  Therefore Richard Denton has shifted his work from the Pauline Epistles to Psalms, and Stephen Beale is developing semantic representations for the Old Testament historical narratives.  We’ve also invited an Old Testament specialist named David Stringham to join this ministry.  Please pray that we’ll be able to develop accurate semantic representations for the entire Old Testament, and that we’ll be able to help translate the Old Testament into many languages.

A New Consultant: We at TBTA are very pleased to introduce David Stringham as a new consultant who will be helping with the development of our Old Testament semantic representations.  David has Masters degrees in both Hebrew and Linguistics, and has taught Hebrew courses at the University of Texas at Austin.  He worked for 31 years at the World Bible Translation Center where he was their Director of Old Testament Translations, and he managed the translation of the Old Testament for 18 of their Bible projects.  David will be joining us part-time to provide his Hebrew and Aramaic expertise as we focus on building semantic representations for the Old Testament.  You can read more about him on the ‘About Us’ page of our website (http://www.thebibletranslatorsassistant.org/AboutUs.aspx).  We are very thankful to God that David is joining this ministry.

The Tagalog and Ayta Mag-Indi projects in the Philippines: The Tagalog project in the Philippines continues to progress well.  After Tod Allman and Ephraim Rey entered the required vocabulary for the book of Esther, our software produced an initial translation, and Ephraim spent just 5 hours editing that text to make it a presentable first draft.  The Tagalog lexicon and grammar are now well developed, so only minor modifications are being made.  The Tagalog grammar will soon be modified to accommodate another language called Ayta Mag-Indi.  A preliminary experiment indicated that what took Tod and Ephraim months to do in Tagalog is taking just hours in Ayta Mag-Indi because the two languages are structurally very similar. Please pray that both of these projects will proceed unhindered.

Another Partnership: TBTA is in the process of partnering with the Free Illustrated Bible organization (www.FreeIllustratedBible.com).  They provide free illustrations for the entire Bible, and have given TBTA permission to use those illustrations in our translations in the Philippines.  So Ephraim Rey is putting our computer generated Tagalog translations into their picture Bible format which is very appealing to the young people in Manila.  Two sample pages of this project are shown below.  The Tagalog translation of Ruth in the picture Bible format is available on our website: http://www.thebibletranslatorsassistant.org/pdf/Ruth%20-%20Edited%20and%20Illustrated%20-%20Tagalog.pdf.  The books of Esther and Daniel will be available soon, and then we’ll work through Genesis.

“The war for souls, minds and lives rages.
Many people who have virtually no access to God’s Truth fall victim to Satan’s liesbecause they don’t understand the Bible.Through partnering in Bible translation, you can put Swords at their fingertips.”
Julie Andersen
Wycliffe Bible Translators 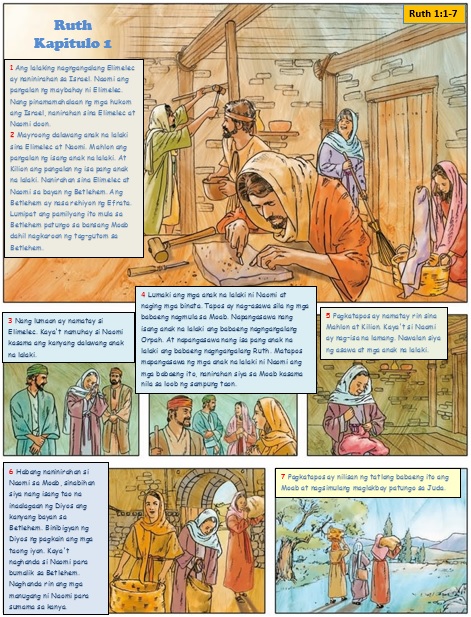 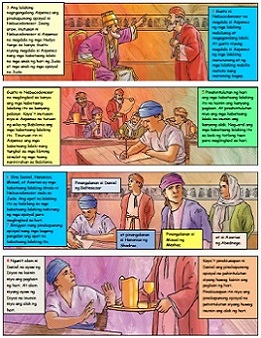 Sample Page from Ruth                                            Sample Page from Daniel
The People of the Philippines: There are a little over 100 million people living in the Philippines, and that number is growing rapidly at a rate of more than 20,000 people per day.  The country consists of more than 7,100 islands, and is home to some of the world’s most beautiful beaches and spectacular mountain views.  At the time of World War II, the Filipino economy was the second largest in Asia, behind only Japan.  However, during the past six decades, the country’s economy has gradually deteriorated for a variety of reasons.  The Philippines’ poverty line is set at an annual per capita income of just $378 (about $1 per day), but more than one fourth of the country’s population is living below the poverty line.  Severe poverty is a significant social issue throughout the country, but no one has any viable solutions.  Numerous organizations from other countries are pouring their resources into the Philippines with a hope for a brighter future.  Please pray that God will somehow help the millions and millions of people here who are living in severe poverty.