Reaching Young People in Manila: Our software has produced Tagalog translations of Ruth, Esther, and Daniel, and we’re working through Genesis.  The translations of Ruth, Esther, and Daniel have been edited and put into the illustrations provided by the Free Illustrated Bible.  We’re now preparing to have these books published by a comic book company.  Young people in Manila read comic books, and comic book versions of Bible books have been used with tremendous success in other countries.  So we’ll be producing biblical books that look and feel just like comic books, but they will contain God’s Word, verse by verse.  Please pray that God will reach many young people in Manila through these books.

Assisting other Ministries in Manila: We’ve offered our comic book versions of Ruth, Esther, and Daniel to several other ministries in Manila, and those books are touching people’s lives.  One ministry is called The Rock, and it provides homeless people and urban poor with meals, a place to shower and wash their clothes, and a place to rest.  The Rock also provides job training and occasionally offers medical assistance.  But their focus is on sharing the gospel and God’s love, and many people have received Christ through this ministry.  You can see people at The Rock reading the comic book version of Ruth in one of the pictures below.  Please pray for the leaders at The Rock as they help meet the spiritual and physical needs of many people.

The Ayta Mag-Indi Project: Approximately 5,000 people who live on the northern side of Manila Bay speak a language called Ayta Mag-Indi.  A missionary with Wycliffe Bible Translators has been working with a team of these people, and they’re close to completing the New Testament.  That missionary is now meeting online with Tod Allman, and they are modifying the Tagalog lexicon and grammar to produce translations of several Old Testament books in Ayta Mag-Indi.  The two languages are structurally very similar, so the work is progressing much more quickly than the original Tagalog project.  For example, what took Tod and Pastor Ephraim Rey thirty three meetings to accomplish in Tagalog has taken only four meetings to accomplish in Ayta Mag-Indi. Please pray that our software will be able to quickly produce translations of numerous Old Testament books for the Ayta Mag-Indi people.

Vanuatu Language Workshop: Stephen Beale served as the translation consultant for the Motalava New Testament project in Vanuatu in the early 2000s.  He’s now preparing to return to Vanuatu and host a three month workshop on Tanna Island.  There are five languages spoken on that island, and he’s hoping that several representatives from each language will participate in the workshop.  The goal of the workshop is to build lexicons and grammars for the represented languages, and then produce initial draft translations of several narrative books in the Old Testament.  Please pray that Steve will be able to finish the preparations, raise the necessary funds, and host the workshop effectively.  Please also pray that the participants will be enthusiastically involved in the translation process.

Producing Diglots for Language Learners: A ‘diglot’ is a book that contains the same text in two languages, and the translations are presented side by side so that people can read the text in both languages.  We’ve recently produced Korean-English and Tagalog-English diglots for the book of Ruth.  The Tagalog-English diglot is being used by missionaries in Manila who are learning Tagalog.  The Korean-English diglot is intended for Korean students who are studying English.  There are many Bible diglots, but the two translations in the diglots produced by TBTA are conveying the exact same information because they both came from the same semantic representations, and both were translated by our software.  We pray that these diglots will not only help people learn these other languages, but that they’ll also help God’s message become deeply rooted in people’s lives.

Sunshine Zone approves Endowment Fund Application: We at TBTA wish to convey our appreciation again to the Sunshine Zone of the Southern California District of the International Lutheran Laymen’s League for approving our request for funding to support TBTA’s work in Vanuatu, the Philippines, and for semantic representation development.  The members of the Sunshine Zone want to see God’s Word made available to everyone, especially the people who have never had it before.  So in early April they voted again to support the Bible translation work that is being done by TBTA.  We sincerely appreciate their contribution.  We also appreciate Dr. Christina Sargenti, who is Stephen Beale’s sister, for presenting our ministry to the members of the Sunshine Zone.

Social Media: TBTA Inc. is now using social media to share our news, progress, and prayer requests.  Stephen Beale has set up our Twitter account, and you can follow us at https://twitter.com/tbta42.  He has also created a new blog at https://tbta42.wordpress.com.  We’ve also started using our Facebook page at https://www.facebook.com/The-Bible-Translators-Assistant-TBTA-207764342586580/.  You can access all of these social media accounts from our website at www.TheBibleTranslatorsAssistant.org.  Jeremiah Chung has also started a Facebook group called Chinese Christian Translators Fellowship; you can connect with him at https://www.facebook.com/paidion.zhong.  Jeremiah also hosts a wiki called GOSP4EL which stands for Global Open Source Projects for Evangelical laities at https://github.com/GOSP4EL/Volunteer-Projects/wiki.  We hope that our presence on social media will attract prayer partners, people interested in working with TBTA, language groups interested in using TBTA’s software, and fundraising partners.

Additional Prayer Requests:
1) Matthew Rodatus is preparing a promotional video describing our ministry, explaining how our software works, and inviting people to become involved. Please pray that God will guide him through the entire video making process.

2) David Stringham is raising financial support so that he can work full time on our semantic representations.  Please pray that God will open the necessary doors so that David can be fully funded.

4) Tod Allman is looking for qualified people who are interested in working with him to translate portions of the Old Testament into other languages spoken in the Philippines.  A translation project requires a team of people – one person that meets with Tod regularly and provides the lexical and grammatical data, other people to check the initial draft translations produced by our software, and many people who are interested in using the new translations.  Please pray that God will provide the necessary teams for many languages in the Philippines. 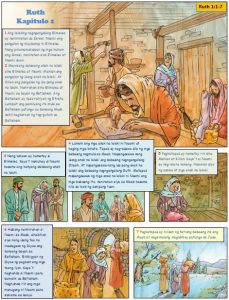 Translation of Ruth in the